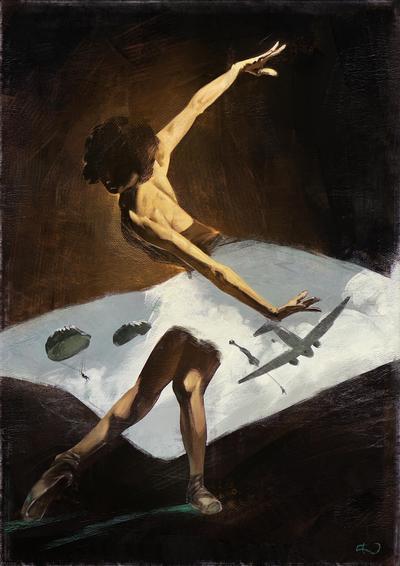 When World War II broke out, ballerina Mira Sanjina was part of the Croatian National Theater (Hrvatsko narodno kazalište) ensemble in Zagreb. After the establishment of the Ustasha-led Independent State of Croatia (Nezavisna Država Hrvatska), Sanjina (who was of Jewish descent) and her husband Ljubiša Jovanović (who was a Serb) fled from Zagreb to Split and then to Ljubljana. Finally, in 1943, they joined the partisans and the Theater of the People’s Liberation (Kazalište narodnog oslobođenja, KNO) in the liberated territory of Bosnia and Herzegovina.

Recalling her first performance as a member of the KNO, the ballet choreography she performed to Dvořák’s Sixth Slavonic Dance played by pianist Andrija Preger, Sanjina described the intense feeling of pleasure: “I danced cheerfully, enjoyed the dance, surrendered to it; I danced in a very beautiful, white, fluttering costume made of parachute silk.” Her dance and her costume, however, caused embarrassment for the audience. That is, the differences in the understanding of appropriate female appearance and behavior made it impossible for Mira Sanjina to share the pleasure of ballet dancing with the Bosnian audience. For many attending the event, Sanjina was probably the first ballerina they had ever seen:

I was not aware of the extent to which it was a shock for an unaccustomed audience, the partisan fighters who lived under very harsh conditions, the Muslim women who had never seen a ballet. The appearance of a ballerina was something quite unexpected for them. […] The Muslim women felt shame while I was enjoying the dance. While I was getting carried away and dancing it up, they were ashamed. It seemed to me that they were exiting the hall bit by bit.

For her later wartime performances, Sanjina adjusted both her dance and her appearance. For instance, for the anniversary of the October Revolution observed later in 1943, she chose to play the “more suitable” Joan of Arc. In addition, the military superiors controlled her costume. On that occasion, Sanjina wore a dark gray woolen leotard. Moreover, until the end of the war, she for the most part danced in classical ballet performances, which usually contained folklore elements.

Informed by traditions and religion, local beliefs about appropriate femininity limited Mira Sanjina’s ability to perform expressively. However, although her classical ballet performances were customized with elements of folklore and although her revealing ballet dresses were replaced with more modest costumes, the wartime spectators, she maintains, responded to the adjustments with immense enthusiasm:

Even today I think that it was perhaps my most beautiful audience […] standing for a long, long time, breathless, […] watching and immersing itself [in the performances] with such curiosity and such attention. I think that I never have had such a nice experience and such wonderful contacts [with audiences] during and after my performances, certainly not in such a way. In the way of a wonderful, chaste audience that was so infinitely grateful, so curious, [the audience] that watched me dance with such pleasure.

Author of the illustration: Dario Jelušić