Forests around the world are rapidly diminishing. Deforestation and forest degradation now account for nearly 20 % of global carbon emissions. The World Bank, the UN-REDD Programme (a partnership of FAO, UNDP and UNEP) and other donors support countries to engage in REDD+, a mechanism agreed upon under the framework of the UNFCCC. REDD+ is a programme to decrease the rapid deforestation.  Norway has played a crucial role in developing REDD+ and will invest 3 billion NOK over the next few years.

Can corruption threaten the intentions of the forest protection programme?

That was the central question discussed at the recent REDD+ seminar “Facing the realities of REDD+ and corruption”, organized by CMI’s U4 Anti-Corruption Resource Centre.

Illegal logging
REDD+ is an effort to give developing countries incentives to protect forest land, by creating financial value for the carbon stored in the forests. The real challenge is that there can be even more profit in agriculture, mining and logging. According to Christian Nellemann, senior officer and head of UNEP's Rapid Response Unit and Assessments, logging has increased in a number of countries. There has also been an increase in related organized crime.

Illegal logging differs from other environmental crimes because of its magnitude. It is impossible to hide trucks loaded with illegal timber. Instead, loggers hide them among trucks filled with legal timber. Inadequate bureaucratic capacities also limit the possibility to monitor and reveal illegal logging.

-These figures can be open to manipulation. Attempts may be made to control measurements and results in particular countries, and it is difficult to implement reliable control routines, says U4-advisor Aled Williams.

Forest land grabbing is also a complicating factor. The objective of REDD+ is to increase the value of forest land, replacing incentives to clear forests. If the forest is worth more standing than fallen, there is an incentive to grab forest land. That can involve corruption.

Wherever there is money, there are also opportunities to grab it. REDD+ funding may be subject to elite capture.  Higher level politicians and public officials may seek to take advantage of the large money flows being introduced to their forest sectors. They can be linked to companies that are involved in land grabbing, and may redistribute land to cronies and friends.

Working on anti-corruption measures
One response from UNEP has been to establish the LEAF (Law Enforcement Assistance for Forests) project in cooperation with the Norwegian government and Interpol. Interpol is the only organization that has a mandate to operate internationally on these issues. However, it is unlikely that law enforcement efforts alone are sufficient to deal with corruption.

The U4 Anti-Corruption Resource Centre is working on policy ideas and developing a body of research and analysis on the issue of corruption in connection to REDD+.

-Existing REDD+ efforts need to take into account the political-economy of deforestation and illegal logging in particular countries that have a history of illicit forest practices, says Aled Williams.

Despite serious challenges, Christian Nellemann is convinced REDD+ is the only way to go, and that the LEAF-project plays a central role in beating corruption. He emphasizes that enormous momentum has been built through REDD+, and that it is important to take advantage of the work that has been done on, for example, forest certification.

-The carbon cowboys will continue their illegal business whether we have REDD+ or not. We cannot insist on having a fully transparent society before we take action. The consequences of not implementing REDD+ are more serious than having to deal with corruption, he says. 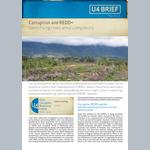 Corruption and other factors can influence deforestation in contradictory ways. For the purpose of country-level implementation of REDD+, donors should focus particularly on three corruption risk areas: land grabbing and...
André Standing (2012)
Bergen: Chr. Michelsen Institute (U4 Brief 2012:2) 4 p. 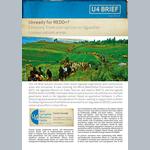 Unready for REDD+? Lessons from corruption in Ugandan conservation areas