In the research project Multi-Disciplinary Approach to Explaining Differential Immunization Coverage, researchers from Chr. Michelsen Institute and the University of Oslo have studied the mechanisms behind the decision to vaccinate a child. It is striking that a poor country like Malawi, with severe lack of qualified health personnel, has obtained vaccination coverage of more than 90 percent. In India, a middle income country, coverage is only 50 percent.

- There are few magic bullets in development, but vaccination is one. Thanks to the high coverage in Malawi, new vaccines have reached vulnerable children in record speed. In a country with poor health care services, high vaccination coverage has a great health impact, says CMI-director Ottar Mæstad.

How has Malawi managed to achieve almost universal vaccination coverage?

A matter of trust

The research project "Multi-Disciplinary Approach to Explaining Differential Immunization Coverage" is funded by the Research Council of Norway. It is led by SUM - Centre for Development and the Environment, University of Oslo.

Malawi has designed an effective system for delivering vaccines. But supply is not enough; parents have to choose to vaccinate their children.

The decision to vaccinate your child may seem an obvious one, but it is not. In Norway, the vaccine against cervical cancer caused considerable stir and public debate when it was integrated in the national children vaccination programme in 2009.

A variety of factors may influence the decision to vaccinate a child. Cost is one of them. Although vaccines are distributed for free, caretakers may still have to cover travel expenses, and may lose one-day’s income to accompany their children. There is also a lot of uncertainty related to the decision to vaccinate or not. What are the chances of becoming ill without the vaccine? How effective is the vaccine? What are the side-effects?

Experiments in economics show that people tend to base their decision much more on immediate benefits and costs rather than on future benefits.

-This also applies to the decision to vaccinate your children. People live in the present, and it seems that long-term gains are overturned by short-term considerations also when it comes to vaccination, says Mæstad.

Yet, one factor stands out in the case of Malawi; trust. The respondents in the Malawi-study express high level of trust in vaccination. They trust the information about the vaccine, the people distributing it and the vaccine itself. Despite uncertainty, and despite some having to incur considerable costs, 96 percent of the respondents had fully vaccinated their children. The high level of trust is a likely factor behind this extremely high coverage rate.

The architecture of choice
The most common policy response to low vaccination coverage is to improve the supply of vaccines. However, this only works if caretakers have trust in the system and the benefits of vaccination.

-Experiments from India support the assumption that supply is only part of the problem. The Poverty Action Lab set up a fully functioning supply system for vaccines in a number of villages in Rajasthan, but this did not improve coverage much. Intervention to stimulate demand had a much larger impact. Several studies have suggested low level of trust as a major weakness of the Indian health system, says Mæstad.

-This knowledge is extremely relevant to health authorities and other actors involved in vaccination programmes. Information about vaccines should present vaccination as the default option - and present the decision not to vaccinate the child as an active choice. In Malawi, vaccination has probably become the default, says Mæstad.

The decision to vaccinate a child: An economic perspective from southern Malawi

The dynamics of childhood vaccination uptake in developing countries are unclear. Numerous studies document the relationship between vaccination coverage and access, socio economic and demographic factors. However, there is less...
Jon Helgheim Holte, Ottar Mæstad, Jagrati V Jani (2012)
in Social Science and Medicine vol. 75 no. 2 pp. 384-391 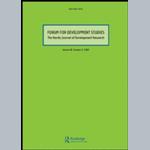 Childhood vaccination is a powerful tool for reducing morbidity and premature deaths, and vaccines are usually provided for free. Despite this, several low- and middle-income countries are lagging far behind...
Alexander Cappelen, Ottar Mæstad and Bertil Tungodden (2010)
in Forum for development studies vol. 37 no. 3 pp. 349-364