A tale of three cities

Maputo has been depicted as a ‘divided city’. How do the people living there imagine and engage with the city’s different urban spaces?  A CMI research project, culminating in the film 'Maputo emergente. Visualising an African divided city' to be made by the Mozambican film-company ANIMA, explores this issue.

Historically, the Mozambican capital Maputo has been a divided city; A city of cement and a city of reeds. This narrative about Maputo is in line with a traditional view of African cities as divided into a formal and an informal city. The formal part of the city, in Maputo’s case, the city of cement, is the product of the colonial era, a city of commerce, business and administration, a clean and tidy space with tall buildings, men in suits and a formal economy. The informal city, Maputo’s city of reeds, is characterized by a totally different imagery. This is where the poor live, the non-educated and unemployed. Maputo’s city of reeds is hectic and chaotic with an informal economy and street vendours.

-Yet, Maputo is so much more than this stereotype. One of the most characteristic features of African cities today is the rapid growth and urbanisation. This does not only change the city’s physical appearance. It also changes the way the inhabitants relate to their city. Our research project The ethnography of a divided city aims to go beyond the traditional narrative of the formal and informal city and explore the ways in which the city dwellers perceive and relate to their city, says Inge Tvedten, project leader and senior researcher at the Chr. Michelsen Institute (CMI).

Breaking fresh ground
Tvedten and his team Bjørn Enge Bertelsen, associate professor at the University of Bergen, and Sandra Roque of COWI, Mozambique, are breaking ground in order to visualize their research by cooperating with the Mozambican company ‘Anima Estudio Creativo’. The film will be thematically framed by the research project, but Animo Estudio Creativo has full artistic freedom. The film will not be a classic documentary, but rather a blend of genres. The producers will use a mix of video, audio files and pictures to convey the atmosphere in the ever-changing city.

The biggest challenge is to avoid ‘exoticism’, which characterises too much of the anthropological film-making according to Tvedten. Still, he is at ease handing the lead over to professionals from an entirely different field. He sees the film as an integral part of the project’s communication strategy.

-A film provides us with a unique opportunity to visualize and communicate a complex subject matter to a larger audience. It also gives us the opportunity to give something back to the people in the bairros, many of whom we have talked to during our fieldwork in Maputo, says Tvedten.

The film will be screened in 10 of Maputo’s 52 shantytowns or ‘bairros’, and will be featured on Mozambican TV, other national venues, as well as in film festivals in Mozambique, Canada and Norway. Animo Studio Creativo will also produce a 15 minute short version of the film, which will be combined with presentations of the research project outputs for stakeholders nationally and internationally.

Women on top of the urban chain
Through The ethnography of a divided city project the researchers have found that the city dwellers do not relate to the historical dichotomy of the formal and the informal city. Instead, they relate to what the researchers have termed a trichotomy; The central city, and the suburban and the periurban parts of the city. The inhabitants in the suburban areas talk about bairros in the central city as though they belong to a different world, and there is an increasing tendency to see the formal city as well as the new peripheral bairros as unattainable urban spaces. At the same time, there are increasing variations within the sub-urban areas where the majority of the population lives.

-When people in the slum areas are asked to draw a map depicting the city, they often leave out the formal city. They feel that this part of the city is outside their reach. They do not know its social codes and norms, says Tvedten.

Yet, there are some groups that are more successful in crossing the invisible boundaries than others.

-Poor women succeed in using and benefiting from the different spaces to a much larger extent than poor men. They make use of social relations and informal networks, and get access to the markets in different parts of the city. For men, there is no in between. Either they have steady jobs in the confines of the formal city or they stay put in their bairro, says Tvedten.

Today, Maputo and its 1.1 million inhabitants has a formal urban structure with seven urban districts and 52 ‘neighbourhoods’ or bairros. Despite its rampant development, policy documents still refer to the city in  ‘formal’ and ‘informal’ terms. Yet, this may change as policymakers recognize how far-reaching the effects of the rapid urbanization actually are.

-The diverse tales of the city and the different forms of being urban that are emerging in Maputo may over time have an impact on urban policy in a way that puts less emphasis on what is perceived as a divide between formal and informal space and more on its diversity, complexity and heterogenity, says Tvedten.

Historically, while cities such as Mozambique’s capital Maputo have been analysed as divided into ‘formal ‘and ‘informal’ spaces, contemporary approaches tend to emphasise the heterogeneity and plasticity of African urbanities....
Bjørn Enge Bertelsen, Inge Tvedten, Sandra Roque (2014)
Urban Studies vol 51 no 13 pp 2752-2769 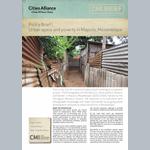 This is the first of a series of policy briefs relating to a research project, “The Ethnography of a Divided City: Socio-politics, Poverty and Gender in Maputo, Mozambique” (2012–2015), funded by the Norwegian...
Inge Tvedten, Sandra Roque, Bjørn Enge Bertelsen (2013)
Bergen: Chr. Michelsen Institute (CMI Brief vol. vol 12 no. 2) 4 p.