Skip to main content
Open menu
More than half of the population in Tanzania run or work in small scale businesses. (Photo: CMI)
4 Dec 2014

A field experiment from Tanzania shows that female entrepreneurs have less success than their male counterparts even after training and provision of grants. Why is it so hard to succeed for women running small businesses, and what will it take to shift the tide?

More than half of the population in Tanzania run or work in small scale businesses, and microfinance has become a major concern for policymakers and donors. What makes the ones who succeed stand out from the ones who fail? Traditionally, the focus has been on lack of money. A study from CMI and NHH researchers supports the growing notion that also gender, knowledge and personality traits are crucial for success. Through a field experiment, the researchers provided members of PRIDE, Tanzania’s largest microfinance institution, with business training and/or a grant. Their main finding is that training and a grant in combination had substantial positive effects, but only for male entrepreneurs.

For female entrepreneurs the formula for success is more intricate.

Being a breadwinner not in charge
Through a series of lab experiments in Norway, the researchers have found that young girls are less competitive and less willing to take risks than men. Their lab experiment in Tanzania confirms their findings. Being measured on competitiveness and the willingness to take risks, the female entrepreneurs consistently scored lower than male entrepreneurs. Willingness to compete is generally stressed a relevant entrepreneurial trait. Does this mean that women do not have what it takes?

Although lab experiments show a gender difference, the explanation is not that easy.

-Participation in the training programmes closed the gender gap in risk preferences. After training, the men were as reluctant as the female entrepreneurs to take risks, says Lars Ivar Oppedal Berge, assistant professor at the Norwegian School of Economics and Postdoctoral Researcher at the Chr. Michelsen Institute.

A lottery experiment also revealed important information about the differences between women’s and men’s life circumstances and opportunities. To explore household dynamics, the researchers went through with a lottery in which the participants were told that they could sign up another person for the lottery in addition to themselves. Almost everyone chose to sign up for the extra ticket, but few of the married women chose to sign up their husbands. Instead they signed up one of their children.

-Our findings suggest that the women’s decision to sign up one of their children comes from a fear of confiscation. If their husbands were aware of the lottery, they might take all of the money. Similar experiments from other developing countries generally generate the same findings, implying that men are in control of the household’s money, says Oppedal Berge.

Tanzanian women face a wide range of constraint on their activities. Not being in charge of the household economy is only one of them. Women typically have the main responsibility for running the household.

-Our data indicates that female entrepreneurs spend 10 hours less in their business each week than men. They also work in or close to their home. Their domestic commitments clearly shape the way they run their business, says Oppedal Berge.

The researchers are now performing further analysis of the data. Preliminary results show that for women who work more than 70-80 hours a week, providing business training in addition to grants have the same effect as for men. Yet, the mere number of working hours may indicate that these women are free to spend as much time as they want on work, and are more similar to their male counterparts than others.

Train women before family life gets them
The field experiment holds important lessons for microfinance institutions and donors promoting entrepreneurship.

-Actors involved in microfinance need take into account the deeper, external constraints that make it hard for women to succeed as entrepreneurs. There is a need for more comprehensive measures in order to improve their chances of success, says Oppedal Berge.

Several interventions have already proven to be effective.

-The earlier you intervene, the better. A number of studies show that offering child care is an effective way of relieving women from their burdens. Providing training before young women get married and have children may also be effective, says Oppedal Berge.

Yet, there is no guarantee that training in entrepreneurship will be sufficient. Household dynamics and domestic commitments still limit the possibilities for many women running a business of their own.

-Changes in attitudes and cultural restraints are difficult to attain, but a crucial part of the picture. We are currently studying the effects of offering courses in reproductive health in combination with entrepreneurship training. The preliminary results are promising, says Oppedal Berge.

Business training in Tanzania: From research-driven experiment to local implementation

Field experiments documenting positive treatment effects have a strong policy message: scale up! However, such experiments are typically implemented under close supervision of the research group in charge of the...
Lars Ivar Oppedal Berge, Kjetil Bjorvatn, Kartika Sari Juniwaty and Bertil Tungodden (2012)
in Journal of African Economies vol. 21 no. 5 pp. 808-827 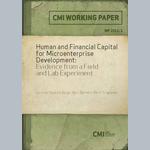 Human and financial capital for microenterprise development: Evidence from a field and lab experiment