100 years since the deportation: “The Armenians are a nation of widows and orphans”

Today, Armenia commemorates the starting date of the massacre on the Armenian people. On 24 April 1915, leaders of the Ottoman Empire arrested Armenian intellectuals and leaders in modern day Istanbul.

The Turkish Minister of War and the Minister of Foreign Affairs openly accused the Armenians in the Ottoman Empire of taking sides with the Russians during the First World War. The government ordered that all Armenians were to be deported from the Empire, and initiated what came to be a trauma that still marks the Armenian identity and the relationship between Armenia and Turkey.

The debate on whether the massacre on the Armenians was a genocide or not casts shadows over the ceremony in the Armenian capital Jerevan today.

No reconciliation without recognition
The decision to deport all Armenians was the start of what the Armenians still call “The Death March”. Armenians from all over the Ottoman Empire had to flee across the Syrian desert, leaving all of their possessions behind. Many were killed by Ottoman soldiers. Many died from thirst, starvation and disease. Historians do not agree on the accurate numbers, but it is estimated that between 1 and 1.5 million Armenians lost their lives during the killings and deportation.

- Chances of any true reconciliation are small unless Turkey officially recognizes what happened as a genocide, argues senior researcher at CMI, Nefissa Naguib. From the point of view of the international legal definition of genocide, what happened to the Armenian people was undoubtedly a genocide. This was not only an annihilation of a specific ethnic group, it was also a destruction of their property and culture, argues Naguib.

The Armenians refuse to settle for a mere apology from the Turkish government. Although there have been attempts of reconciliation, Armenian-Turkish relations remain cold. She also points to the fact that an official recognition from Turkey will probably entail compensation processes, and that this complicates the matter for Turkey.

A vibrant diaspora
Those who survived resettled in cities all over the Middle East, keeping their faith, language and traditions alive. Nefissa Naguib is very apprehensive of the memories of the survivors these days. Through her research projects, she has gained unique insight in the Armenian diaspora in the Middle East, US and Canada.

-Armenians were scattered throughout the world after experiencing violence perpetrated by all sides involved during the upheavals of WW1. During that period, populations in the old Ottoman Empire were undergoing turbulent transformations. Battled, political maneuverings, and alliances between communities brought with them massacres, destruction, deportation, and unprecedented convoys of refugees to the Arab provinces of the Ottoman Empire. Like other groups, the Armenians also suffered. Although they had always enjoyed special privileged positons under the Ottoman sultan, their situation changed when, during the turbulent years of the late 19th century, Russia proclaimed itself guardian of all fellow Christians in the Empire, including the Armenians. Russia started to provide the Armenians with weapons and to support their separatist movement.  The Turkish minister of war and the minister of interior orchestrated the banishment and massacre of Turkey’s Armenian population. Most of the atrocities were committed in Eastern Anatolia and in the hot Syrian Desert. Though the figures concerning how many perished are subject of bitter dispute, there can be no disputing that Turkish Armenia was destroyed, and almost half its people perished. The majority of survivors were women and children, says Naguib.

-The seminary inside the Armenian Quarter in Jerusalem was converted into residential quarters for male orphans. The walls around the courtyard of this building are carved with dates and inscriptions; and an especially long one reads: "Chaz Chabazian. I am from Lezk of Van. Born in 1909. From Araratian orphanage. I am a scout. I wrote this in 1922 when I was 13."   The inscription was translated from Armenian by Kevork Hintlian, the Armenian community historian. After translating several carvings on the walls, he said ‘The Armenians are a nation of widows and orphans. You might say that the painful history is the glue that binds the Armenians. In the diaspora Armenians have built churches, schools, clinics, clubs and homes for the elderly . They have a strong sense of community’, says Naguib. 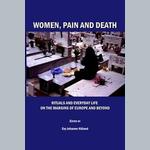 Nefissa Naguib (2008)
in Evy Håland: Women, pain and death: Rituals and everyday-life on the margins of Europe and beyond.. Cambridge: Cambridge Scholars Publishing

Nation of orphans and widows. Armenian memories of relief in Jerusalem.

Nefissa Naguib (2007)
in ARR: Idéhistorisk Tidsskrift (Norwegian Journal of the history of ideas) vol. 2 no. 3