Who are the Least Advantaged 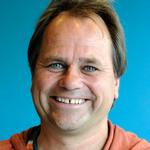 Journal of the European Economic Association

Towards Gender Equity in Development

Forest becomes frontline: Conservation and counter-insurgency in a space of violent conflict in Assam, Northeast India