How banks assist capital flight from Africa: A literature review

Systematic studies of the banking sector’s involvement in facilitating capital flight from developing countries are limited. This report was commissioned by Norad’s Anti-Corruption Project (ANKOR) for the purpose of summarising key lessons from the existing literature and to identifying knowledge gaps. The study focuses on capital flight from Africa. It is a desk study, based on a review of library and online literature databases and reports and documentation from national and international organisations. The review demonstrates that banks should not be disregarded as passive players when analysing capital flight. Banks play an active role in facilitating capital flight from Africa. However, to improve the regulation of the banking and finance sectors, there is a need for more detailed knowledge on how banks actually operate as facilitators and the mechanisms applied. 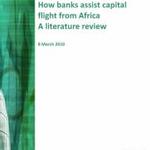 Capital flight and the banking sector

Did British rule in Africa foster a legacy of corruption among local elites?