This is the Annual Report for the 5th Reality Check, synthesising the main findings from the sub-reports on Cuamba, Lago and Majune. Fieldwork was carried out in October 2015. The focus in this report is on the quantitative expressions of poverty and well-being in the three study sites, as these appeared through the Reality Check Baseline (2011) and Endline (2015) surveys. 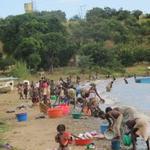