Tax collection can relieve many developing countries from aid dependency and facilitate sustainable economic growth. The potential to raise revenue from personal and corporate income taxes, value added tax and property tax is huge. Comprehensive reforms of tax legislation and tax administration are required in many countries to increase tax collection.  Yet, local and national measures are not sufficient.

-Global regulatory issues play a crucial role, says Odd-Helge Fjeldstad, senior researcher at Chr. Michelsen Institute and research director of the International Centre for Tax and Development. ICTD was one of the actors invited to contribute to the report “Tax in Developing Countries: Increasing Resources for Development”, by the UK Parliament’s Committee on International Development.  The Committee is appointed by the British House of Commons to examine how to improve British development policy and to promote self-reliance among UK aid recipients.  Fjeldstad and ICTD-director Mick Moore were also invited to the expert hearings in the House of Commons.

Lack of reciprocal regulations
The report lists clear recommendations and stresses that developing countries’ capacity to collect tax is not conditioned only by the policies which they themselves adopt. International rules and efforts play a major role. Lack of information from and between countries and companies make it hard to reveal cross-border tax evasion and irregularities. The US has been in the forefront with their US Foreign Account Tax Compliance Act (FATCA), which requires tax authorities to automatically exchange information and figures. A similar worldwide system of automatic information exchange, would enable irregularities to be more readily detected and ease the job for tax collectors. Today, the exchange of information is based on a “request” approach. This requires more resources and capacity from tax administrations.

Odd-Helge Fjeldstad points out that there are features that make it difficult to transfer FATCA- regulations directly to developing countries.

-There are too many exceptions and too many complexities. But, the international community has a lot to learn from the U.S. who put international tax challenges on the agenda early on. The European Union is now in the process of developing regulations that could apply internationally, and it is important to keep momentum in this process, says Fjeldstad.

The experts who contributed to the recent Parliamentary report also emphasise the need to detect and stop irregularities like abusive transfer pricing and the need to overhaul regulations for multinational companies, including measures that require corporations to report their financial information on a country-by-country basis.

Dodging the tax net
Tax evasion and irregularities are also closely connected to internal conditions like informal economies. In many developing countries, large parts of the population and their economic activities fall outside the tax net. The report draws attention to Senegal. In 2009, the West-African country had a working population of 5 million, but 4.5 million of these were in the informal sector.

-Governments in developing countries depend on controlling the informal economy to raise more tax revenue. More potential taxpayers and enterprises need to be registered. Tanzania, with a population of around 45 million people, has about 500,000 registered taxpayers at the national level. A possible solution is to offer different kinds of incentives to unregistered enterprises, such as distribution and marketing assistance or micro-credit schemes in return for registration, says Fjeldstad.

Broadening the revenue base by taxing the informal sector will inevitably increase the tax burden also for the poor and less affluent. According to Fjeldstad, governments in developing countries need to be careful not to over-tax people and enterprises at the bottom of the income scale. It is also important to avoid that the costs and administrative burden of broadening the tax base outweigh the benefit. But, in general, the benefits will be sufficient to support such initiatives. Formalisation may have positive impacts both in terms of increased tax revenues and in terms of governance, since those who operate in the formal economy are more likely to hold their governments to account.

- A main challenge in many countries is that the political and economic elite do not pay tax. Consequently, they have limited interest in developing a better system for tax collection and administration. If tax collection is to have any legitimacy, the elite will have to pay their fair share. 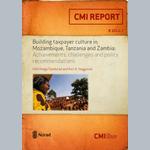 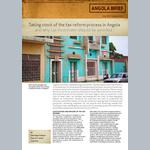