Addressing the knowledge-gap on anti-corruption interventions

- Many factors affect the outcome of anti-corruption interventions. Political will, power dynamics, international pressure and local context are all factors that influence interventions. It is difficult to point to the most decisive one, says Jesper Stenberg Johnsøn, advisor at CMI’s U4 Anti-Corruption Resource Centre.

- We need to improve our understanding of the relationship between these various factors in order to be able to say what works, what does not and why. Donors and researchers need to address the lack of knowledge and operationally relevant research, adds U4-advisor Nils Taxell.

Assessing the evidence base
Together with the Department for International Development (DFID), Taxell and Johnsøn have reviewed and evaluated existing research on donor-supported anti-corruption interventions. This summer, U4 organized a workshop together with DFID that outlined a research agenda aiming to bridge the evidence gaps. They recommend more research, in particular cross-country studies, research on countries in conflict and research on the role of private sector actors as drivers of corruption.

-Research has so far focused on corruption in general. We need to be more specific. For example, in sectors such as health, there is much stronger and more concrete scientific evidence. Researchers, policymakers and donors know that initiatives like handing out mosquito nets are effective in reducing malaria. We need to also understand the concrete effects of anti-corruption interventions. This field needs more operationally relevant evidence, says Johnsøn.

Lack of evidence for most interventions
Overall, the review of existing research shows strong evidence for only two interventions: public financial management (PFM) reforms and supreme audit institutions. Only in the case of PFM reforms does the evidence clearly suggest that they can reduce corruption. Research on PFM has benefited from reliable measurement tools, and there have been a number of cross-country studies. This makes conclusions possible.

For other types of interventions, the U4-DFID found significant evidence gaps. These are explained in large part by a low number of studies, data and methodological problems, lack of systematic and comparative research, and little evidence on the interactions and interdependencies between different anti-corruption interventions. 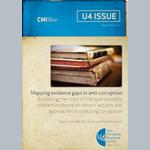 Mapping evidence gaps in anti-corruption: Assessing the state of the operationally relevant evidence on donors' actions and approaches to reducing corruption