Is China too big to fault?

In October 2010, Chinese dissident Liu Xiaobo was awarded the Nobel peace prize. The response from the Chinese government was immediate. It froze political and economic relations with Norway. New research from CMI shows that the Chinese sanctions had a substantial negative effect on Norwegian direct exports to China. In addition, an analysis of Norway’s voting pattern in the UN suggests that Chinese sanctions may have been effective in changing Norway’s position on human rights issues. The potential consequences are chilling.

CMI researcher Ivar Kolstad has attempted to quantify the effect of the sanctions on Norwegian exports to China. Comparing Norwegian exports to that of a synthetic control country similar to Norway on all relevant characteristics, he found that direct exports to China were significantly reduced in the years following the Nobel prize. In total over the years 2011-2013, the results suggest that the sanctions reduced Norwegian direct exports of fish to China by between 125 and 176 million USD. The total export reduction across all sectors constituted between 780 and 1300 million USD over the same period. This amounts to a reduction of between 9 and 14 per cent of direct exports to China.

By 2014, however, Norwegian exports to China had rebounded, suggesting an effective normalization of relations with China. There are several possible explanations for this. One is that upholding sanctions may have raised prices in China, entailing a political cost for the Chinese government. Given the small role played by Norway in Chinese markets, this seems an unlikely explanation. Another possibility is that the Norwegian government traded concessions in other areas for renewed access to the Chinese market.

And the Chinese sanctions appear to have had a striking effect on Norwegian foreign policy. Kolstad looked at the voting pattern on human rights resolutions in the United Nations, and found that Norwegian agreement with China increased in the year following the Nobel prize. This again as assessed against a synthetic control country similar to Norway in past voting patters, which suggests that Norway’s agreement with China would have been lower in the absence of sanctions.

While several studies have documented the effect of Chinese sanctions on trade, Kolstad’s study is the first to additionally show that Chinese sanctions may have been effective in changing foreign policy in the targeted country. If it is the case that the autocratic government can effectively use economic sanctions to affect the foreign policy positions of democratic governments, the implications for international progress on human rights are chilling. As their economic power grows, autocratic regimes may increasingly and successfully use this power to thwart criticism and initiatives challenging their position.

If they had it to do again, it is possible that the Norwegian Nobel committee would not have awarded the peace prize to Liu Xiaobo. Given the observed consequences for the Norwegian economy, a committee mostly consisting of politicians from the major Norwegian political parties may have thought twice before making such a decision. And the same applies for future decisions to award the prize to dissidents in autocratically run countries where Norway has strong economic interests, of which there are now many.

In light of this, for Western democracies and other countries to play a progressive role in advancing human rights in this context, it seems vital to ensure the independence of human rights promoting institutions from commercial and economic interests. In addition, the close integration that we see in foreign policy of promoting a country’s own economic interests can be detrimental to the credibility of policy to promote human rights internationally.

More broadly, cases like this may make us want to rethink our approach to China. Over recent decades, Western democracies have been happy to trade with China, an increasingly productive and prosperous country whose government continues to lack democratic legitimacy. Rather than increase chances of democracy, the resulting economic progress seems to have reinforced the regime’s hold on power. At an international level, China has become too big to fault, with possible detrimental effects on the international human rights situation. 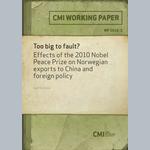