Steps to limit the endemic corruption around junior mining companies

Donors can contribute to reduce the entrenched corruption and violence connected to the mining industry in developing countries by strengthening monitoring and enforcement of environmental laws, and by promoting measures that increase the costs for junior mining companies to engage in corruption and intimidation.

In the U4 Issue By the gun or by the bribe, Michael Dougherty explores the widespread corruption linked to the mining sector in Guatemala. The Guatemalan state lacks the capacity to monitor and enforce compliance in the mining sector. This leaves junior mining companies that depend on quick gains, free to engage in corruption and violence. The paper proposes ways to reduce the prevalence of corruption among junior mining firms in developing countries.

In the mining industry, large- and medium-sized companies avoid taking on risky, exploratory stages and prefer junior companies to plough the early way. There are over 2,000 junior mining companies in the world, and the number is growing with the boom in exploration. They thrive in weak political environments, due to their flexibility and adaptation capacity, and depend on fickle venture capital – unlike larger companies whose income comes from production.

Donors should promote the accountability of junior companies by putting at stake their ability to partner with larger companies. Junior firms are not as visible to public scrutiny as the large, well-known companies are. They are willing to take high risks in search of returns, and face low reputational risks. They often willingly engage in bribery and violence to obtain land and licenses. Larger companies then take over production sites once junior firms have secured the rights. Sometimes large companies also sell projects back to minor firms if local conditions for exploitation become too unstable.

The flexibility and flight-by-night nature of many junior companies, the ease with which miners can circumvent efforts at environmental governance, the currency of bribery and violence, the capture of elected officials by private interests, and the complex relationship between domestic managers and foreign capital render corruption endemic and pronounced among junior mining companies in Guatemala.

Donors should promote the accountability of junior companies by putting at stake their ability to partner with larger companies. Donors can also support industry watchdogs, promote oversight of mining activities, and call for new or amended multi-stakeholder initiatives that set global standards for junior companies.

Guatemala is an example of a weak state where corruption can be found at every level in the process of prospecting and acquiring production sites, and where violence is a common occurrence in the frontline. The authorities lack capacity to monitor whether companies respect license limitations and exploitation laws, and struggle to enforce the rules even if they know they are breached.

Conflicts of interest plague environmental impact assessment (EIA) processes, since the prospecting companies are themselves in charge of commissioning them. Agencies that run EIAs are inclined to produce inexpensive, superficial reports that favour the companies’ interests.

Donors can help strengthen the capacity of the state to regulate, enforce, and monitor the mining industry. To improve the situation we need to:

Supporting community monitoring is a win-win

Local communities and mine workers are uniquely positioned to monitor mining companies. Donors can encourage the adoption of binding community consultations to approve licensing, and support the organisation of community and miners groups to monitor performance.

Donors can also promote procedures that strengthen the independence and objectivity of EIAs:  require neutral third parties to disburse payments; remove budgets from first round of proposal submissions, and require stringent training and certification standards for environmental consultants.

U4 Brief. Andrés Mejía Acosta. 2014.  The extractive industries transparency initiative: Impact, effectiveness, and where next for expanding natural resource governance? 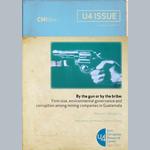 By the gun or by the bribe: Firm size, environmental governance and corruption among mining companies in Guatemala

(You can also read the most important points in this publication in our blog: Steps to limit the endemic corruption around junior mining companies) This U4 Issue discusses the corruption risks faced by...
Michael L. Dougherty (2015)
Bergen: Chr. Michelsen Institute (U4 Issue 2015:17) 30 p