Are Ethiopia’s women on their way to a more equal future?

Ethiopia’s prime minister Abyi Ahmed quickly became a symbol of progressive forces supporting women’s empowerment. Half of the ministers in his government are women. The president, the supreme court judge and the head of the election commission are now all women. But the rest of the country is not keeping up.

In April 2018 Abiy Ahmed became the new prime minister in Ethiopia. He has spread a hope of a bright future for the country. There are plenty of reasons for this hope, and some of them are that he has appointed half of the ministerial posts to women. He has also appointed a woman in the positions of president, the supreme court judge and as the head of the election commission. Have these changes in politics affected the lived lives of women in Ethiopia?

Employment – not just a positive effect on empowerment
Lovise Aalen has been following the political developments in Ethiopia since 2000 with frequent research visits to the country since then. From November 2018 till the end of January 2019 she was in Ethiopia again, in collaboration with Ethiopian Developmental Research Institute (EDRI). This stay was mainly in the capital Addis Ababa, with smaller visits to Hawassa in South-Ethiopia. She was to contribute to the research on the project  Women in the developmental state by interviewing women regarding the influence of  paid work on women’s empowerment. The survey had 1600 female participants. One half of these 1600 women were unemployed, and the other half were employed. The data are still being collected and analysed, but some preliminary results are available.

The survey had four modules. The first module focused on the material wellbeing of the respondents.

-Our preliminary analyses show that women’s contribution to the household economy leads to a better economic and material situation for the members of the household. This in turn can lead to better access to education for more children, says Aalen.

-Will playing participation in the workforce lead to higher or lower fertility among women? asks Aalen. The PhD student in the project, Sandra Halvorsen, addresses this question in her thesis.

The focus for the fourth module was domestic violence. While the survey data are still not analysed, our qualitative interviews show that being employed can have two different outcomes. In both cases having an independent source of income had a direct effect on conflicts and arguments between husband and wife. The difference is whether this effect was a positive or a negative one. For some women, having an independent source of income lead to fewer arguments because they now had the opportunity to control their own finances. Arguments regarding finances would decrease, and as a result domestic violence would also decrease. On the other hand, being employed and having a source of income would for some women lead to an increase of violence. For these women, having an income lead to more arguments and conflicts. These arguments where mainly based on the man’s wish to remain in control of the economy of the household, and therefore also the woman’s income. An increase in arguments may lead to an increase in violence.

-Being employed is shown to neither have a strictly positive nor negative influence on women. How being employed affects women’s empowerment is therefore a complicated question, and it doesn’t have a straightforward answer. It is important to remember that empowerment is a multidimensional phenomenon, says Aalen.

Ethiopia has had a noticeable industrial growth, with mainly female employees. Men don’t have the right to control women’s work anymore, but women’s working conditions in these industries are poor. On average their salaries are 30 dollars per month, their opportunities to organise in labour unions are restricted, and they have to work long hours. Even though women are a bigger part of the political scene now than before, better working conditions are still not on the political agenda.

How has the changes under Abiy affected women in Ethiopia in general? This is a question it is difficult to give a specific answer to, because of the nature of these processes. They are complicated and they take time. Possible results of the changes can be visible during and after the election in 2020. For now, however, there are no notable changes in women’s status or role in the society, and no laws have been changed to improve women’s empowerment.  Women in general do not have a strong public role. The women who fight different outcomes of the patriarchal culture, like child marriages, domestic violence and circumcision, are still not visible in the public debate.

-This doesn’t mean that the changes Abiy has made regarding women in politics are unimportant. Women in politics have an important symbolic value, and they can function as role-models for other women and young girls. It could be a significant shift, but it is still too early to say for sure, says Aalen.

Interview and text by Solveig Svensson 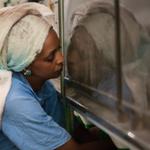 Women in the developmental state: female employment and empowerment