Political corruption differs from bureaucratic corruption. Political corruption is not only about getting the money in, but also about securing power. The consequences are therefore dramatically worse. A president helping him or herself to money from the treasury and buying political support is a whole different story than a teacher or a nurse demanding bribes to do a job. The problem with political corruption is that it goes beyond greed and personal enrichment. It gives both the means and the incentives to hold on to power.

In the recently published book ‘Political corruption in Africa. Extraction and Power Preservation’, an international and experienced team of authors examine who is involved and what practices are used to extract and to buy political support. Their analysis is based on seven country cases from Sub-Saharan Africa.

Inge Amundsen, senior researcher at CMI, has edited the book. In this interview, he talks about the political economy behind political corruption and why it is crucial to crack down on it.

-The distinction between political and bureaucratic corruption is a central premise for this book. Why is it so important to distinguish between these two forms of corruption?

-Because they are so different in the way we need to deal with them. Bureaucratic corruption can be curbed quite easily if there is a political will to do so. Political corruption, on the other hand, is a very different ball game. The case of Qatar is a text book example of the difference between the two forms of corruption and why we need different approaches to curb them. The emir of Qatar has cracked down on bureaucratic corruption to such a degree that it barely exists any longer. He has effectively wiped it out. But Qatar is still politically corrupt. In practice, the emir owns the entire country, something which enables him to use the system to not only stay in control, but to reinforce it. Political corruption does not simply give incentives for controlling the state, it is a means of maintaining this control. This is what makes political corruption so serious.

We are dealing with a political elite that steals from the treasury and extracts from the economy and re-invest the money in their hold on power. Part of the money is spent on mere consumption, but part of it is spent on power preservation. The politically corrupt leaders buy friends and voters, they buy control and oversight and institutions, and they buy themselves impunity – by buying judges.

There is a saying that the fish rots from the head. This is certainly true in terms of corruption.

-Why is there so little talk about political corruption and so few efforts to address it?

-Because it is so hard to do anything about it. Curbing political corruption requires the involvement of very many actors and pressures, and it requires deep democratization. This is time consuming and there are no quick fixes. The seemingly unsurmountable difficulties in tackling political corruption could also explain why anti-corruption interventions have mostly focused on bureaucratic corruption. But this reluctance to deal with root causes also explains why so many anti-corruption interventions have failed.

One example is the large amounts of aid money that has been spent on establishing and running anti-corruption commissions in several countries that score high on corruption indexes. Yet, the results are very modest, and has in some cases been counter-productive. Several incumbent presidents have used the anti-corruption commission to get rid of political rivals and opponents. To the extent that any ‘big players’ have been convicted on corruption charges, it is because the conviction has the blessing of the ruling party or political elite as it has strengthened their grip on power. 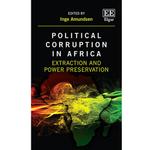