Hamas, the most influential Islamist party in occupied Palestinian territories, replaced its strategy of electoral boycott in 1996 with participation in 2006 – a change not fully explained in the literature. This article seeks to fill this gap by employing party change theories to analyze Hamas’s strategic turnaround. The article demonstrates that the move from boycott to participation can largely be attributed to a change of dominant coalition. In line with the theoretical assumptions, serious environmental challenges and shocks altered the power-balance within Hamas. The coalition dominating Hamas at the time of the boycott became weakened, giving way to more moderate elements. This new dominant coalition saw political participation as a legitimate avenue to pursue Hamas’s cause, and its rise to power secured a change of strategy and participation in the 2006 elections. 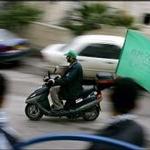