Mass Media under Fire: Making Sense of State Attacks on the Media in Sub-Saharan Africa

How do we understand patterns of government interference with media outlets in Africa's transitional polities?  Drawing on a novel dataset that tracks the extent and character of government actions against the media in twenty-two different African countries, this presentation will offer preliminary insight into this question.  Our guiding assumption is that governments will seek to control the circulation of information more during some periods than others.  In particular, when governments face the prospect of being displaced or destabilized, and when they are seeking to enhance or extend their power via constitutional changes, their interests in corralling the free media should be heightened. Our analysis thus examines the direct effects of factors such as elections, military interventions, constitutional referenda, and food crises on government interference with private media outlets.  This offers preliminary insight into the ways that changing political contexts affect the health of the private media.

Peter Von Doepp is an expert on state-media relations in Africa's new democracies and is currently researching why governments interfere with the media in some contexts and less so in others. He is a professsor at the University of Vermont and a guest-researcher at CMI. 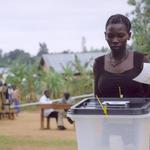 The Declining Governance Situation in Malawi