The summer has begun, and as people are waiting for the start of Ramadan in the middle of July, insecurity as to whether Ramadan will be a cause for celebration, spreads. For several months now we have been hearing about the campaign “Tamarrod” (Rebellion). Their goal has been to collect more than 15 million signatures. The culmination of the campaign will be a massive protest on the 30th of June (1-year anniversary of Morsi’s presidency). They believe that with 15 million signatures they have a legitimate demand for President Morsi’s resignation. This is because he was voted into office with 13 million votes. As the 30th draws nearer Tamarrod claims they have 15 million signatures, with more coming in every day. The planned protests have gained massive coverage in the media, and the Muslim Brotherhood and other political groups affiliated with them have planned, and executed several mass rallies. They are planning a sit-in in Madinat’Nasr’s Raba3a El 3adawaya mosque to counter the Tamarrod-protest in EteHedeyya Palace and Tahrir Square. The week before Sunday the 30th has cemented people’s belief in widespread protests, and possible violent unrest, as Cairo has been hit by a massive fuel shortage. The fuel shortage has made more people determined to hit the streets on Sunday as they have had enough with daily electrical cuts, soaring food prices, occasional fuel shortages, stagnant wages, and general infrastructural problems making everyday life hard for the people of Umm El Dunya (“The mother of the world”, Cairo’s nickname). There have also been rumors stating that the fuel shortage has been orchestrated by the presidential office to make people unable to join the protests. The president also gave a speech on the evening of the 26th of July. He spoke for nearly 3 hours about his accomplishments in the last year. The speech was well received by his supporters, as he started it by stating that he had made mistakes. The speech has on the other hand been ridiculed by his opposition, amongst other things, for stating that he made mistakes, then blaming everyone else for it. The speech has provoked many, and Facebook has since been full of jokes making fun of it and the President.

However, what has to be kept in mind is that this time around the picture on the ground has changed. It is no longer the Egyptian people against the current regime. The people have split into two fronts, opposing each other as pro- and anti-Morsi. People, who expect violence, expect it to arise from clashes between the groups, not between the security forces and the people, as happened during the January revolution in 2011. As a friend told me, he would not participate in the protests this weekend because “If it involves blood between Egyptians… Then I am no part of it”. This blog post is a personal account of peoples experience on the ground in the midst of the current situation in Cairo, Egypt, the week before the 30th of June.

Fuel lines. “Mafeesh Benzeem” (There is no fuel). The theme of Cairo for the last few days. The lines can be seen all over, clogging up the streets and roads criss-crossing the city. The other day, I spent my morning going to get fuel with friends. I had spent the night at their house in 6th of October City, outside Cairo proper, and was supposed to catch a ride back to Zamalek (island in the Nile, pretty much in the middle of Cairo), when my friend went to work. However, that never happened. We had decided, the night before, to postpone the fuel-mission until the morning, because we were thinking the after-work lines would be massive and take all night. When we left the house, around 7.30 AM, her husband came with us because he wanted to make sure we got fuel before we headed off to work. He was nervous, because the car was running low, and therefore avoided unnecessary U-turns and other detours. We then headed for the closest Gas-station. The line was long, but not depressingly so, only 100meters or so. We quickly had to turn around though, as the station had run out of “Benzeen”.  People were gesturing to us from their cars. Wiping their hands and waving at us to turn around so everyone could get back out of the line and head for another station.

We headed for another gas station. This one had a longer line, 200-ish meters, but with a real “kunafa” (Egyptian expression, metaphor, meaning a messy traffic-jam). We were, after a short time in the line recommended to head over to the other side to approach from the exit, because the station had been split into two, with a line coming from each side, to be able to service the customers faster.  We were well placed, and were sitting in the car chatting and checking the news on our phones and laptops as we waited. My friend phoned her job to tell them she would be late, and that she was considering working from home, since driving to work and back would mean being back in the fuel lines the same evening. They asked me if I was fine with taking a cab all the way home, since I was now losing my ride to Zamalek, which was where I was supposed to catch a cab to take me all the way home to Heliopolis (neighborhood in the north-east fringe of Cairo). I told them I didn’t mind, as long as they would help me find a cab. A lot of taxis these days run on natural gas, and they are therefore not hit by the fuel shortage in the same way, although as we wait for our turn at the pump there is also a build-up in the queue for the gas, as the stations with this option are few and far between. 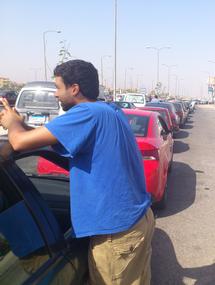 As we edge closer to the pump we get the message, the station has run dry. A nervous looking young employee waves his arms in front of his body in a movement signaling the petrol has run out. I expect angry replies as people have waited for an hour, but people just resign and head out. A rush to the next station commences. We join them. As we line up for this, the third station, the line is even longer, but appears more organized. The one for natural gas is separated from the two lines for petrol, and the station has been split in half with cars approaching from both sides to be more efficient. My friend’s husband decides to kill the engine, and push the car the few meters we get to approach every time the line moves.

As we wait I look around and am surprised to find people chatting together and laughing and making jokes on the side of the road. I would have thought the situation to be more tense, but people seem to have reached a state of quiet accept. A lot of people are discussing the situation, and it seems people become more and more convinced this weekend’s protests will be huge, and they are therefore waiting for this. Tensions do spark however, whenever someone tries to cut in line, and taxi and microbus-drivers seem to be more eager, seeing they’re losing money waiting in line.

As is natural, when waiting in line for close to 3 hours, nature calls and we girls want to use the bathroom. We get out of the car to go over to the station, and my friend’s husband insists to take us over there. She asks him if he’s nervous, since we’re there. He replies that having 6000 upset guys waiting around is not the best situation for us to be walking through alone.

No cutting in line!

As we get very close to the pump a white Mercedes from the late 80’s tries to cut into the line a couple of cars in front of us. Behind him a grey Toyota pushes too, and the driver keeps honking. My friend’s husband loses his patience and tells the guy off, and asks him to stop honking and forget about cutting in front. The man replies “I’m handicapped”. My friend’s husband gets embarrassed and apologizes. He turns to us and says he’s embarrassed he yelled at the only handicapped man. However, people are determined not to let anyone pass who didn’t wait their turn, and no gap is allowed to let them enter. This is a type of quiet collaboration between all the people who have waited in line together. 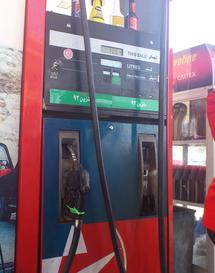 Oh, sweet relief. We finally make it to the pump, and not only are we allowed to get some fuel, we get full tank! We had been told in the line they put a maximum on 20 liters for everyone to make sure more people got a bit. This moment calls for an “Al Hamdulillah” (thank God) and I feel our mood mirrors an image I found posted on Facebook, of a young man kneeling, overjoyed, in front of a petrol-pump and its operator. However, this ordeal being over, we brace for the next one, this weekend’s protests. People are nervous and angry and the supermarkets have been rushed as people stock up to prepare for longtime unrest. Nobody knows what will happen, they tell me. They only know it will be big. We all worry for violence and bloodshed, and as the news rolled in while we were waiting for Morsi’s speech in the evening, it seems the list of casualties has already been started. I don’t think the fuel lines are making people happier.

Honduras slipping back into authoritarian rule