My seven months in Brazil have come to an end. I’m on my way to the police base in Complexo do Alemão to say farewell. Alemão is an agglomeration of favelas in the north of Rio de Janeiro, where I’ve carried out the lions share of my fieldwork with the soldiers of the military police that patrol the city’s “pacified” favelas.[1] I get into one of the gondolas of the cable car that transport passengers from the train station at Bonsucesso, a middle class neighborhood, to the hilltops in the favela. The view of Alemão from above is impressive: an endless landscape of rolling hills, covered by the sprawling maze of red brick buildings that characterizes Rio’s informal settlements. The gondolas normally run empty, but today I’m accompanied by a blond woman in her thirties and a black man in his early twenties. As we drift above the rooftop terraces of the favela the woman looks at us with concern. “We’re moving really slow, aren’t we?” She’s worried something might be wrong. The man sitting next to me confesses that he’s afraid of heights, and that he hates riding the cable car when it’s windy. The movement of the gondola makes him sick. The two of them start talking about their fear of getting stuck in a gondola during a shootout in the favela. The cable car normally stops during long and intense shootouts, and lately these have occurred frequently. The woman says that you often don’t hear the shooting when you are in the gondola – a couple of weeks ago she got off at the terminal with her 3 year old daughter and was told by the employees to hurry home, since there had just been heavy shooting in the neighborhood. When they got to her mother’s apartment one of the victims of the shootout was lying dead at the doorstep.

In spite of the violence the woman tells us that she loves Alemão. She grew up here, but after 30 years living in the favela, she eventually moved to the suburbs in the north of the city. “It has gotten much more dangerous in the suburbs now, with this area being pacified.” The man looks at her in surprise. “Do you think this area has been pacified?” The woman hums. “No. No it hasn’t.” She points in the direction of her mother’s home, which faces one of the most critical areas of the area. She tells us that the apartment has been hit by bullets twice. I ask her whether the favela changed with the pacification. “There is more shooting now” she says, and adds that whereas shootouts only occurred during certain hours of the day before the police occupied the community, today there is no way of knowing when there is going to be confrontations. Before the area got pacified they used to get warned in advance when the police staged operations in the favela, and had time to seek refuge at home. The man agrees. He tells me that the traffickers are constantly competing for power now, and that they don’t respect the residents anymore. We reach one of the stations, and both of them get off. Three middle-aged men enter the gondola. They are discussing the public spending related to the coming Summer Olympics. “They should have spent that money on health, on security” one of them says, but immediately corrects himself: “No, not security. When they spend more on security the violence increases.” One of the other men agrees: “There is only one way [to stop the violence]. They should make harsher laws.” The first man replies: “20 years ago, when I first came here we didn’t have this – 18 year old punks making this mess…” He complains about the violence and brutality of the traffickers: “They should kill all of that pest!” he adds. I’m struck by the similarity with the rhetoric of the soldiers working at the pacifying police units (UPPs). In spite of recent attempts to reform the police, hard hand policies still receive a lot of support among police officers and favela residents alike.

I get off at my stop and walk across the street to the UPP located next to the cable-car station. The soldiers at the base greet me heartily. They have taken a liking to me over the past few months, and by now most of them consider me the “base mascot”. One of the soldiers plays me an audio recording of a recent shootout in the favela. It lasts three minutes, and the intense sound of machine guns, rifle shots, and handguns is unmistakable. The audio was recorded by residents during a recent shootout where four soldiers where ambushed and cornered. Two of the soldiers had to seek refuge inside the apartment of a local family, and were only able to escape after 3 hours under heavy fire, when rescued by a team of soldiers and a “caiverão”, the military police’s infamous armored personnel carrier.

End “the logic of war”

The UPPs where established in Rio de Janeiro in 2008 and promised to bring peace and tranquility to the residents of the city’s favelas, and end the “logic of war” that prevailed in the city. The approach is based on the principles of community policing, but in spite of its progressive rhetoric, it represents a heavily militarized approach to public security. Since 2013, the fragility of the armed peace created through the UPPs has become evident. Throughout 2014 violent confrontations between the police and the drug cartels present in the favelas became the norm rather than the exception, with increasing death tolls in pacified areas. The current situation seriously compromises the sense of security among residents and police alike, and the project’s promise to end the logic of war. Furthermore, the high number of on-duty police officers wounded or killed in shootouts complicates the possibility of implementing proximity policing practices and reforming the police. In January this year a new group of colonels assumed the leadership of Rio’s Military Police (PMERJ), with a mandate to address the problems faced in the UPPs and lay the grounds for wider reform of the institution. 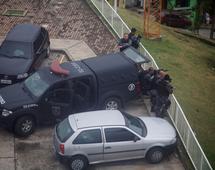 Institutional reform has been a long pending task that gained priority with the implementation of the pacification project and the strong critique of the police in wake of the violent repressions of the protests of June 2013. Reform attempts are modeled on the philosophy of proximity policing, and the success of the UPP project is key in the efforts to reform the police. Consequently, one of the key priorities of the new leadership has been to guarantee the security of soldiers working in the favelas. Several officials with experience from the police’s special operations unit, BOPE, have been transferred to the coordinating office of the UPPs (CPP), collaborative efforts between the special units and the UPPs have been strengthened, and UPP soldiers are receiving tactical training by the special units command (COE). Increasingly, the same special units that traditionally entered the favelas in police operations to kill and apprehend drug dealers are participating in operations in pacified areas. BOPE has a reputation as one of the worlds best trained military units in urban warfare tactics, but ironically, as of today, the soldiers with most combat experience aren’t BOPE soldiers, but soldiers working in critical UPPs such as those in Alemão, a clear indicator of the failure of the project in many areas.

War on the favelas

In spite of six years of “pacification”, there is still a generalized understanding among police officers that they are waging a de-facto war in the favelas. This understanding spans across the entire hierarchy of the institution, from soldiers to the leadership of the police. In a recent interview, Colonel Robson, the PMERJ’s second in command analyzed the current context that the military police operates within:

You have [a range that spans] from proximity policing at one extreme […] to a more conflagrated police in a situation of war. It is not a politically defined war: it is not a war in the political sense, but it is a war in the practical sense – in its effects. You have rifle shots, you have rifle bullets, you have war equipment, war tactics, war experiences, antagonizing groups – who don’t care about the issue of death as a result… right? So the practical effects of that are war effects. […] [According to] the ideal type of ‘war’, the political meaning of [the concept], you can say that some element is lacking. There certainly is, but in practice, that which feeds the social representations of that connectivity [sic] is war!

In the past, Brazilian intellectuals have coined the term “metaphor of war” to account for the representations of the crime and violence in Rio de Janeiro. The representation of Rio as a city at war was developed in the 90’s after a series of violent episodes that produced a generalized sense of insecurity among the city’s residents. The rhetoric of war implied a militarized response by the state, and in consequence a situation of war in the city’s streets.[2] The observations I’ve made during my seven months of fieldwork with the police show that the “pacification” has not been able to alter this situation. The logic of war that the project aims to break is at the very core of Rio’s pacification of the favelas, which in practice is carried out through armed confrontations between the police and armed groups within pacified favelas, where the main objective (on both sides), in spite of the rhetoric of peace, is still to kill the enemy.

[1]The “pacification” of the favelas is Rio’s latest attempt to suppress the violence of the city’s drug cartels, and involves the occupation and patrol of the strategically located favelas by the military police.