"My Justice": The new role of warlords in Afghanistan

International efforts to strengthen the formal justice sector in Afghanistan have largely failed. Attempts to rebuild the national army and the police have not provided the security that was expected. The international support has thus shifted from the Afghan Government to the support of informal justice mechanisms; security has been ”bought” from local defence groups and warlords. With renewed strength and justice in their hands, warlords and local defence groups use their military and political influence to enforce “their justice” over that of the State and the citizens, often to protect their own illegal activities.

Mohammad Akbar Sarwari has taken part in several studies of the informal justice sector and will present his research drawing on case studies from three Afghan provinces: Kunduz, Nangarhar and Uruzgan. 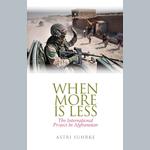 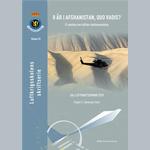 Why is it that we have not seen more positive results in Afghanistan since 2001? What are the major challenges, for the Afghans and for us? Security has worsened in many...
Arne Strand (2011)
in Torgeir E. Sæveraas, red.: 8 år i Afghanistan, quo vadis? Et seminar om militær maktanvendelse. GILs luftmaktseminar 2010. Trondheim: Tapir pp. 39-45. (Luftkrigsskolens skriftserie, vol.23) 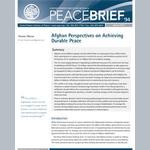 While momentum in pursuit of a peace settlement for Afghanistan increases, ambiguities remain in the U.S. strategy, and there are questions about the ability of the Afghan government to successfully...
Hamish Nixon (2011)
United States Institute of Peace (USIP) (Peace Brief no. 94) pp. 1-5