Electoral mismanagement and post-election violence in Kenya: The Kriegler and Waki commissions of inquiry

The 2007 general elections in Kenya were fiercely disputed and triggered widespread violence throughout the country. After former UN Secretary-General, Kofi Annan, brokered an accord between the rival parties leading to the formation of a grand coalition of the declared winner and the opposition, two official commissions of inquiry were appointed by the new government. One commission – dubbed the Kriegler Commission after the name of its chair – was mandated to review how the elections had been conducted and document how irregularities had led to the challenged results. The remit of the other commission – commonly referred to as the Waki Commission after the name of its chair – was to investigate the extent and causes of the violence that erupted in the wake of the elections. This article provides a reading of these two reports through the lens of the human rights instruments to which Kenya has acceded. It argues that an array of human rights was violated and that the causes underlying the eruption of post-election violence must be considered in terms of the deep-seated social structures and historical injustices that successive post-independence governments had failed to address. 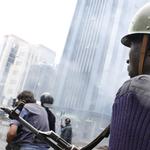