In 2015, more than one million migrants reached Europe in the largest movement of people since WWII. In order to seize control of “irregular migration,” the EU and Schengen countries instituted a new policy of regional containment from late March 2016 that targeted migrants arriving via major land and sea routes. Moreover, European transit countries, with Hungary in the lead, strengthened border control and built new fences to deter migrants. In the Mediterranean, humanitarian search and rescue missions intensified, as did EU border patrols and surveillance. The efforts to constrain, deflect and deter migrants are likely to continue and even intensify. Effectively, a policy of humanitarian containment by the EU and Schengen member states establishes the Middle East as a “catch basin” for refugees and migrants alike. To study the origins of this dynamic, the SuperCamp project combines refugee-, border- and archival studies for an inter-regional analysis of immobility and containment.

The Middle East as a zone of containment

The Middle East region is not only a spatial container and “catch basin” but also takes on features of what can be termed a SuperCamp,where refugees and migrants are not so much hosted as held hostage. The Middle East region now forms a regional zone of containment, a SuperCamp under humanitarian government. As pointed out by Are John Knudsen (Chr. Michelsen Institute) in his introduction to the panel, the refugees’ and migrants’ mobility are circumscribed locally (host states) and regionally through bilateral- (EU-Turkey deal) and multilateral treaties (Schengen). Refugees and migrants typically lack the rights that accrue to ordinary citizens, hence depend on host states and the UN-system (UNHCR, UNRWA) for their upkeep. There are now more than 500 camps in operation, they range from traditional refugee camps in the Middle East, to various types of internment camps and “hot spots” in Europe – examples include the large refugee camps Zaatari and Azraq in Jordan, transit camps in France like the Calais “jungle” (now closed), the infamous Moria internment camp in Lesvos, Greece’s largest camp, and Cara de Mineo in Sicily, until recently Italy’s major migrant “hot spot” center. Together, the treaties and camps underpin a regime of forced immobility designed to keep refugees and migrants inside the Middle East region and outside of continental Europe.

Tracing the historical roots of encampment

In order to trace international humanitarian responses to the refugees in the Middle East, we need to go back to the mid-19th century Middle East. The history of refugee resettlement in the late Ottoman and mandate-period Middle East, shows the longer lines of this development, as discussed by Benjamin Thomas White (University of Glasgow). He traced the shift towards practices of containment that occurred as a dynastic empire gave way to nation-states, with a particular focus on the Baquba refugee camp in post-Ottoman Iraq. One core research focus is how regional displacement in the late Ottoman and early-Mandate period lay the foundations of state policies and early “encampment”.

The policy of encampment gained pace during the period 1950-2000, following the camp policy that was instituted to respond to the Palestinian refugee crisis, but later extended to other crises and regions as well. For 70 years, in a highly politicized context, the United Nations Relief and Works Agency (UNRWA) has delivered temporary humanitarian assistance to Palestinian refugees, Kjersti Berg (Chr. Michelsen Institute) highlighted some dilemmas arising from UNRWAs long-term tenure. Established in 1949, UNRWAs mandate has been limited to the “humanitarian realms” and the agency is not empowered to provide any “durable solutions” to the refugees’ plight. In sheer numbers, the Palestinian refugee population is one of the largest, and their displacement one of the most protracted and characterized by a lack of access to rights. The refugees’ “Right of Return” to Palestine is enshrined in international law, but Israel rejects their return, as well as the quest for statehood. Due to political impasse, UNRWA therefore continues to provide quasi-state services and assistance to the refugees.

The years from 2000 onwards have seen the policies of containment, which are so central to refugee camps, taken even further. The containment of migrants not only involves protracted “strandedness” and immobility, but is also about governing migration through disruption and keeping migrants constantly on the move, as Synnøve Bendixsen (University of Bergen) argued in her presentation. Based on ethnographic fieldwork along the so-called Balkan route, she explored the effects of containment by the EU and Schengen member states. The Balkan region has been reconfigured as a transit and waiting zone by the ongoing bio-political policies of forced immobility. In this process, the migrant journeys, their speed, strategies and imaginaries are constituted through a humanitarian architecture that keep refugees stranded both inside and outside the EU.

In a time where migration and refugee policies are entering both public and political forums of debate in full force, an analytical project that combines specialized research fields that seldom communicate – refugee, migration and humanitarian border studies and history – provides important insight for enhanced understanding of both regional and global forces of humanitarian containment.

By Are John Knudsen and Kjersti G. Berg

This project is funded by the FRIPRO-programme of the Research Council of Norway, and it runs from 2019-2022.

This blog post is based on a panel presentation at the seminar: “Assisting and protecting refugees in Europe and the Middle East – politics, law, and humanitarian practices” 19 September 2019 at PRIO in Oslo, Norway. It was first published on the Norwegian Centre for Humanitarian Studies blog. 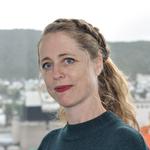 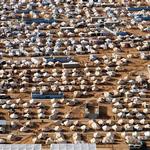